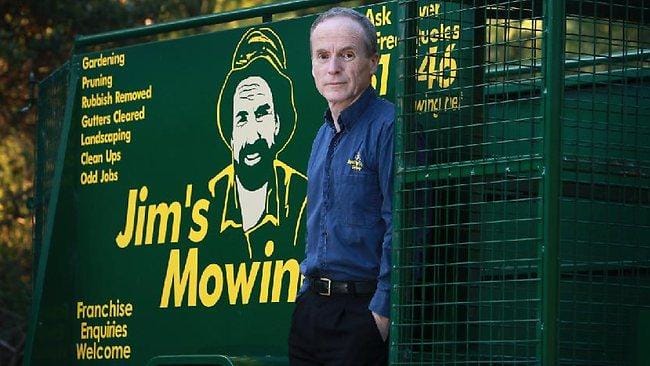 Putting a value on a business doesn’t only come down to dollars and cents – at least as far as Jim Penman is concerned. As the founder of Jim’s Mowing – now a hugely successful, multi-million-dollar company – Jim knows it’s not all about the money.

Jim also knows that everything is relative. When he launched what was to become Jim’s Mowing in 1982, his capital investment was just $24. That doesn’t sound a lot now but back then, it was everything he had.

It’s hard to believe now, but this global success only got underway because Jim was desperate.

“I never intended to do all this. Mowing was my weekend job because I was at university doing a PhD in history and had to support myself,” he told Coast to Coast Australia.

“But then my academic career crashed, so I started the gardening business. Initially, I was disappointed it crashed, but now I think wow, I dodged a bullet!”

The first thing you notice about Jim is how down-to-earth he is. Whilst he is more than happy with the path he took, he also acknowledges that he didn’t try hard enough at university. Ironically, Jim’s father wasn’t particularly happy with his career choice, as he hoped he’d aspire to more.

“I think people can be very elitist these days. They want a white-collar job with a high salary, but there are excellent and satisfying manual jobs out there. Many millionaires are people who went into basic service-type jobs. The great thing is, you don’t need to spend a lot of money in that type of job; you don’t need expensive suits and cars,” he said.

With university out of the picture and an income needed, Jim decided to expand his one-man mowing business by “employing a few subbies”. However, that situation was to quickly change.

“When I started over 30 years ago, there was only really one franchisor offering garden care services. I was worried we’d lose customers to them so forming my own franchise was self-defence. I thought I could do it better than them,” Jim said.

“I was blown away that in my first year, I already had 60 franchises with people coming from interstate to join. Then I realised we could do more than just gardening, like cleaning.

“I really underestimated the potential in the beginning.”

Jim quickly learned that people like established brands – that’s what helped attract customers and franchisees. But still, Jim knew you couldn’t count the value of a business just in money.

“That’s all there is to it, but you can’t have one without the other.”

Today, the Jim’s Group covers everything from mowing and cleaning to dog washing, book-keeping, removals, mobile catering, TV repairs and more. That $24 investment has built an empire. But as the head of that empire, Jim likes to keep things ‘real’ and still gets on the mower whenever he can!

He is also currently running a huge campaign to attract more franchisees.

“We are knocking back leads as we don’t have people in some areas. The demand for our services just keeps on coming and we need more franchisees. All our franchisees are busy year-round which is unusual.”

So, what’s the attraction?

“We offer very thorough training, support and guidance for all our franchisees. We do this to support them and because customer service is everything. We have a survey system in place to ensure we are doing it right,” said Jim.

“Buying a franchise is a great way to get into business but you should do your own research. There are some absolutely shocking franchisors around.

“I think you have a greater chance of success with a good franchise than on your own. A recent survey found that 95% of independent cleaning businesses in the US close in their first year. We only have an 11% failure rate in the first year and that’s generally due to health problems or someone being offered an amazing job. And some people just shouldn’t be in business!

“If you’re thinking of buying a franchise, the best piece of advice is to do your homework. Get hold of a list of current franchisees. If the franchisor won’t give that to you, walk away, don’t give them a deposit or anything. Get the list and ring as many franchisees as you can. Ask them what it’s like, ask if they get looked after. See what they think of it. If there is any negative feedback from franchisees, walk away.

“The people that make the best franchisees have got initiative but can also work well within a system. We find, for example, people who have been in banking or the military make very successful franchisees.

“A franchise is still your own business, so you’ve got to be prepared to work hard. You’ve got to have a passion for customers – and not just as a way to make money!

“You’ve got to really want to be doing what you’re doing. When I was mowing lawns myself, I would do anything to get the very best result. That glow of satisfaction of doing a job well is such a big part of it. You’ve got to do a magnificent job and turn up when you say you will.

“Take the humble jobs. I still mow my lawns at the farm. I like physical exercise.”

Even at this stage in life, with so much success, Jim isn’t one to just sit back and relax.

“You never get everything right. Every day you should ask yourself, how can I do it better? I ask myself all the time, how can I give better service? Our complaint rate is very low but it’s not zero, so we can always do better.”

When Jim’s Book, a biography by Catherine Moolenschot was released this year, it was described as a ‘warts and all’ story – and Jim is the first one to agree. He may never have to worry about money again – a far cry from those university days – but that hasn’t changed who he is.

Jim likes nothing better than spending quality family time with his wife and children. He also loves talking to his franchisees. On the day we spoke, he’d already spoken to eight franchisees by 10am.

“I make myself accessible to them because I want to help but also because I enjoy it. Being accessible is so important in business. People underestimate that,” he said.

“It’s important because as well as helping, you’re also learning more about your business and how you can do better.”

Contrary to what you may think, Jim doesn’t drive an expensive car or dine out every night at gourmet restaurants. He doesn’t believe living a life of luxury is healthy.

“The best thing about making money is giving it away.”

Whilst Jim may have swapped an academic career for the life of an entrepreneur, he never surrendered his love of research or his belief that there were better ways of treating mental illness.

His commercial success enabled him to launch a Biohistory research program in 2007, now The Biohistory Foundation, and he currently gives around $1 million a year to the research. As Dr Penman, Jim has co-authored papers in leading journals on behavioural brain research and physiology.

“Leading a life of purpose and meaning is more important than just being happy. People think if I have that big house or that expensive car, I would be happy. That’s not the case. Give away your money and time. And that will make you happy. What you leave behind is your legacy.”